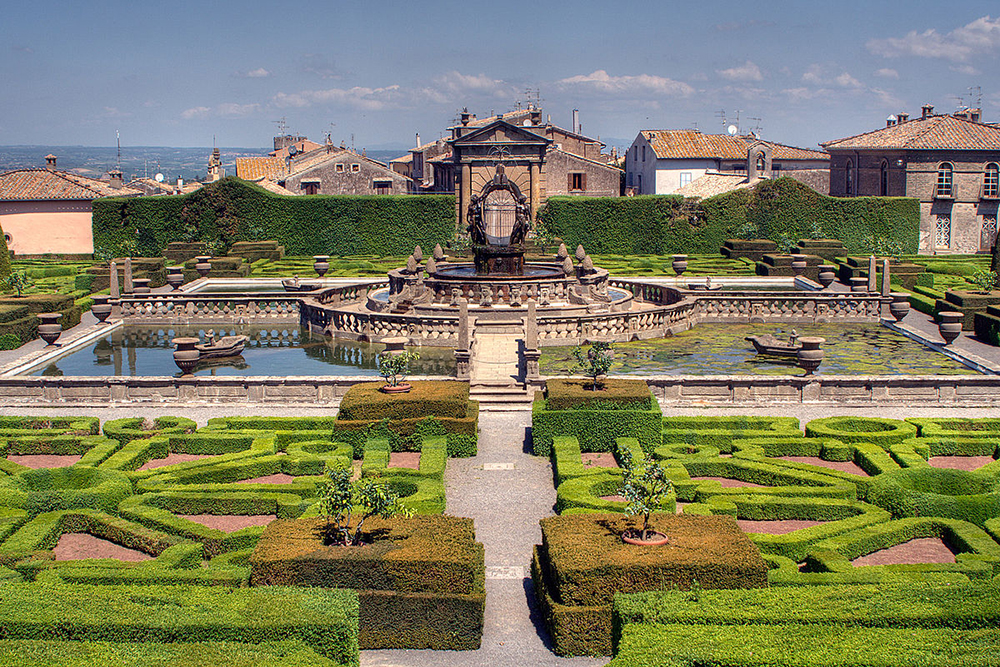 Villa Lante, in Bagnaia, is situated 4km from Viterbo. It is one of the greatest Italian achievements of the XVI century. The park, of over 22 hectares hosts many secular trees creating an enchanted atmosphere. In the park you can admire a spectacular system of fountains and water features arising from stunning geometric forms created by evergreen hedges and peperino statues, the overall visual effect is truly astonishing. The garden shows works by great Italian architects and sculptors such as the Fontana dei Mori (Fountain of the Moors) by Giambologna, pseudonym of Jean de Boulogne, a Flemish sculptor. Giambologna arrived in Rome in 1550 and later moved to Florence to the Medici court, where he became the greatest Mannerist sculptor of his time for his original marble and bronze creations. His most famous work is “Il Ratto delle Sabine” (“The rape of Sabines”), it is located in the Loggia dell’Orcagna, or Loggia dei Lanzi in Piazza della Signoria in Florence. The construction of Villa Lante began in 1511, but it was completed around 1566. Its design is attributed to the architect Jacopo Barozzi da Vignola the same designer of Palazzo Farnese in Caprarola. 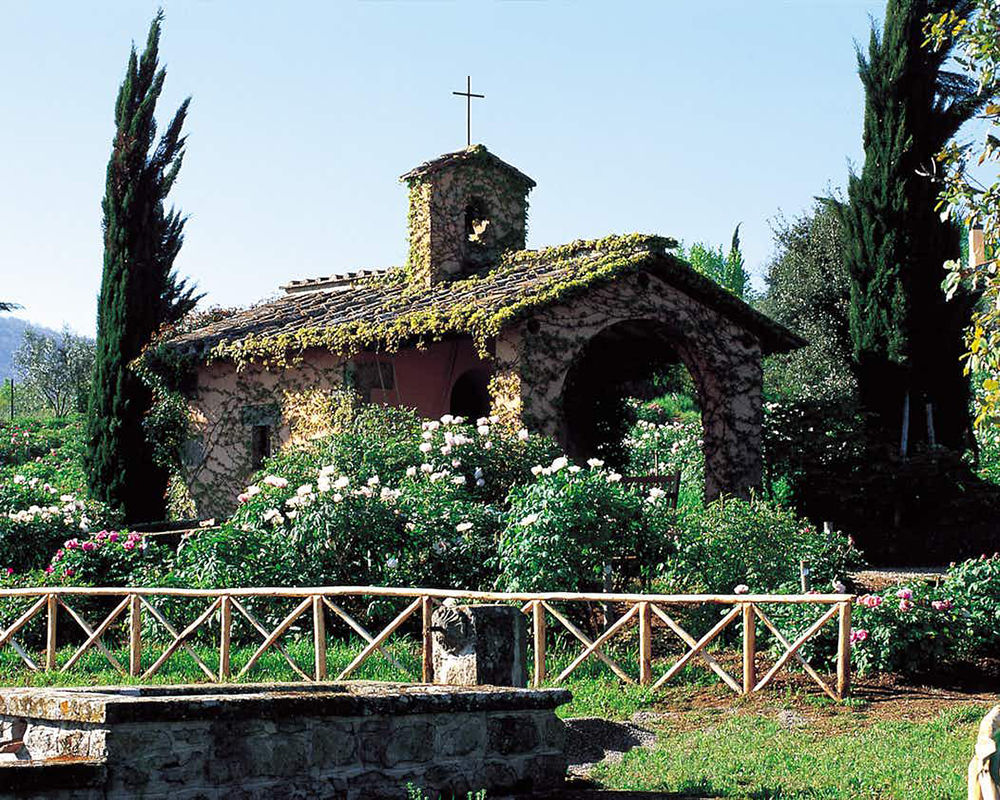 This garden boasts the richest and most complete collection of Chinese shrub and herbaceous peonies in the world. It is located in the district of Vitorchiano, along the Viterbo-Orte highway. It is a corner of China in the heart of the Lazio countryside: within its 15 hectares you can find more than 150,000 peonies plants of 600 different varieties belonging to almost every known botanical species and to most cultivated natural hybrids. During flowering, from early April to late May, the center offers a unique show of charm and beauty: thousands of blooms of diverse shapes reveal a chromatic range spanning from absolute white to deep purple-black, passing through the most delicate and unusual shades of pink. The welcoming cafe-restaurant offers a pleasant break during the journey through the heady colours of the peonies. 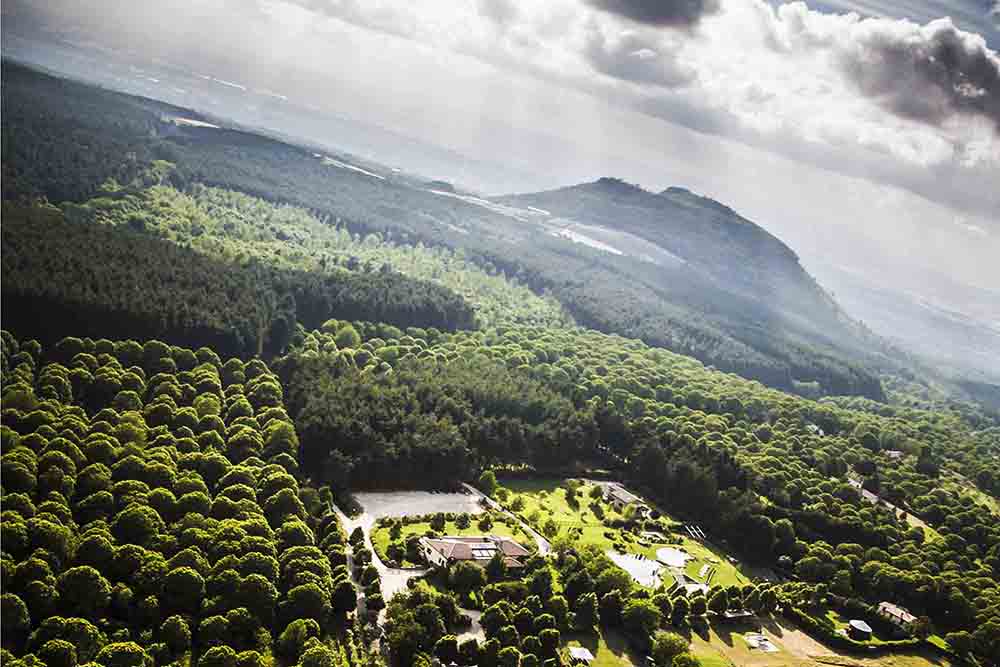 Park of the Cimini Mountains

Tito Livio mentioned the park of the Cimini Mountains for its impenetrability. In fact the geological events that took place around the Cimino-Vicano volcanic complex had an impact on the vegetation of the Cimini Mountains: the lava of the two areas was very rich in potassium therefore it provided an exceptional foundation for plant growth. The lava, together with the particular fresh, humid micro-climate due to the proximity to Lake Vico as well as the altitude, contributed to thick vegetation flourishing. On the slopes and the summit of Mount Cimino at a height of 1053 meters, there is an ancient, thick, beech forest (Fagus sylvatica) with trees dating back hundreds of years. Descending to a lower altitude you can also find chestnut trees (Castanea sativa), black and white hornbeams (Ostrya carpinifolia, Carpinus betulus) and Turkey oaks (Quercus cerris) covering Mount Palanzana (802 meters), Mount Fogliano (965 meters) and the other elevations. 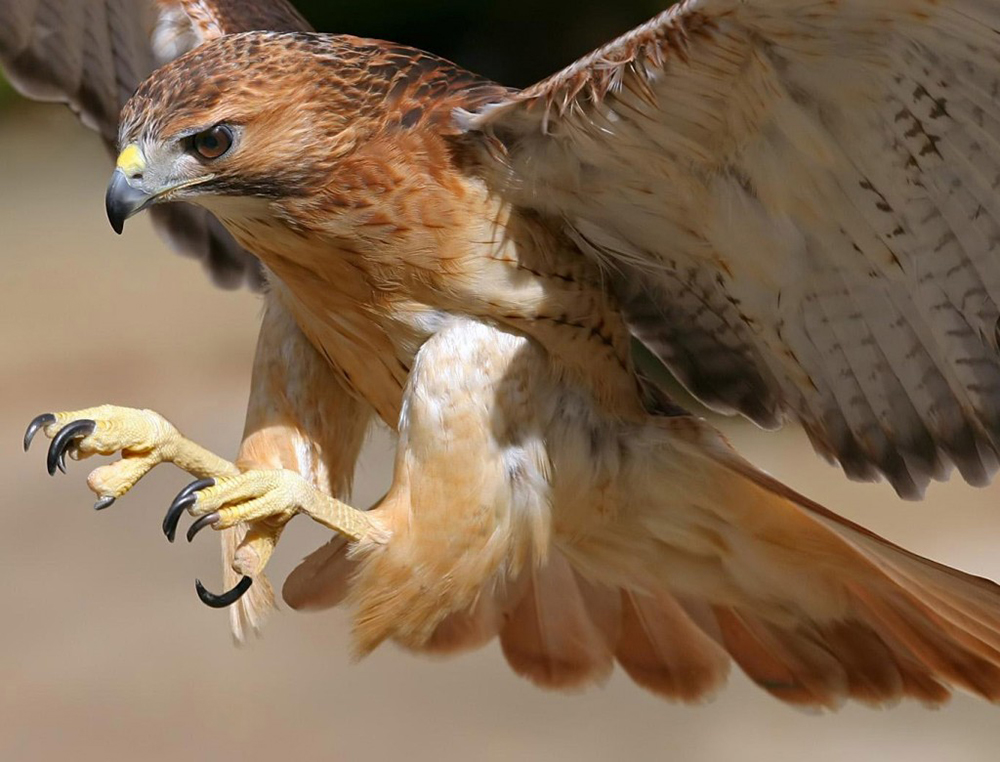 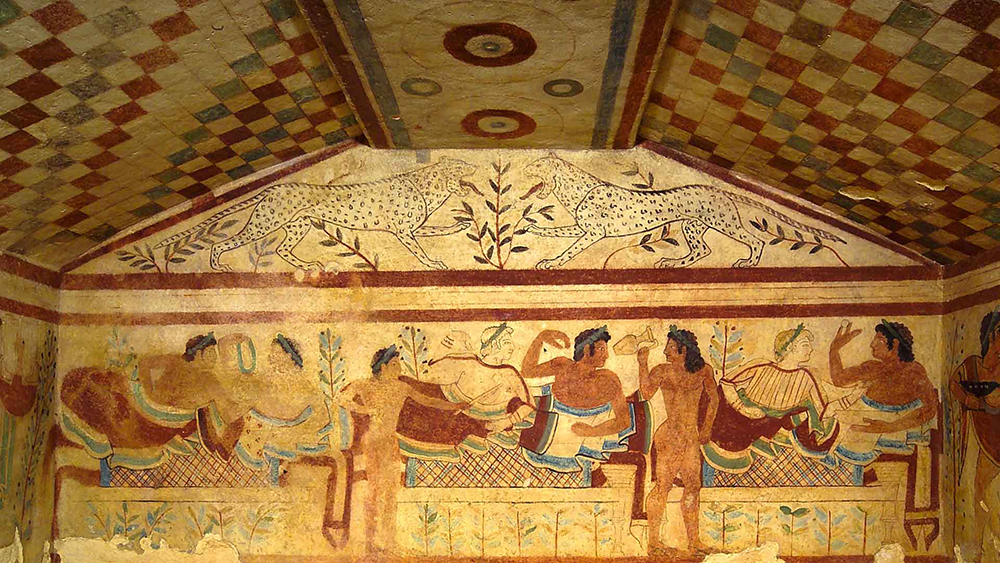 Following the Via Cassia towards Viterbo then turning at Vetralla towards Monteromano you run across the medieval city of Tarquinia. In 2004 it was included along with Cerveteri (another extraordinary Etruscan city close by) as one of the 44 Italian sites listed in the Unesco World Heritage Sites for its extraordinary Etruscan Necropolis. Unesco claims: “Tarquinia and Cerveteri are examples of the creative genius of man: the large-scale murals in Tarquinia are exceptional both for their formal qualities and for their content revealing aspects of daily life, of death and the religious beliefs of the ancient Etruscans “. The two Necropolises are a unique and exceptional proof of ancient Etruscan civilization, the only type of urban civilization in pre-Roman Italy. The National Archeological Museum houses an important collection of Etruscan artifacts where you can admire the Winged Horses that used to decorate the Temple of Ara della Regina as well as other interesting artworks. 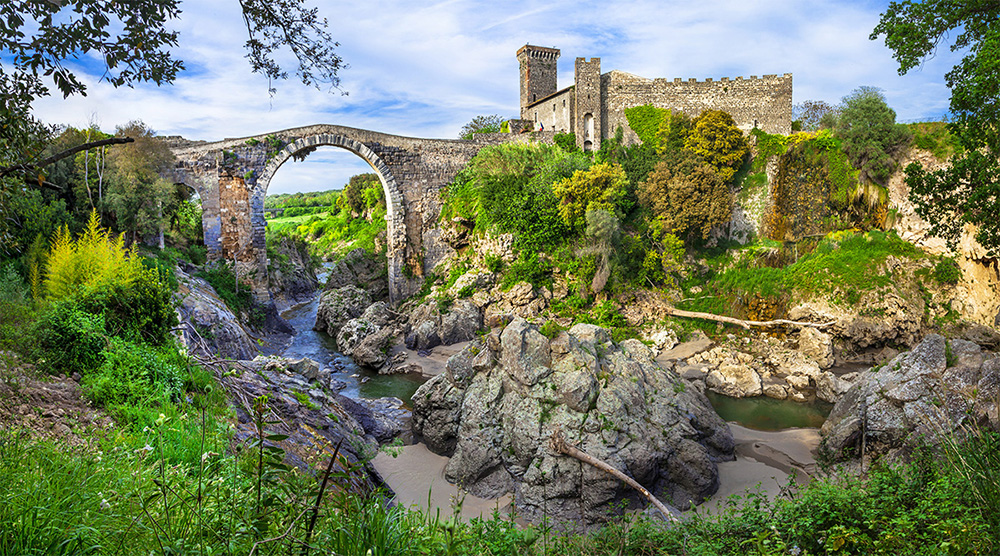 The park covers an area of 900 hectares between the districts of Montalto di Castro and Canino. An area of unspoiled nature in the heart of the Maremma Laziale. Canyons have been carved into the volcanic rocks by the Fiora river which following a small waterfall widens into the magical Pellicone pond. You can meet Maremma cows and wild horses through Mediterranean scrub and small valleys besides the remains of the ancient Etruscan-Roman city of Vulci dating back to the 4th  century BC. The park offers a network of marked trails to visitors, allowing you to visit the archaeological excavations as well as admire the natural beauty of the area. The remains of the town and the thermal plant testify the ancient city-state. You can enter the archaeological site through the remains of the Urban Gates of the imposing city walls. Near the West Gate you can admire the remains of a Roman aqueduct and also the forum with the Great Temple and the Honorary Arch, a commemorative work of Publius Sulpicius Mundus, a Roman senator who lived between the 1st century BC and the 1stcentury AD. The Sacellum of Hercules, the baths and the Domus with its mosaic floors and underground areas are likewise noteworthy. Do not miss the guided tours to the numerous Etruscan necropolises, such as the Oriental Necropolis, with the Tomb of François, famous throughout the world for its paintings, the Tomba delle Iscrizioni (Tomb of the inscriptions) and the magnificent Tumulo della Cuccumella (Tomb of Cuccumella). You will find refreshments in the Park: the Locanda del Parco, where you can taste typical dishes of the Maremma culinary tradition.