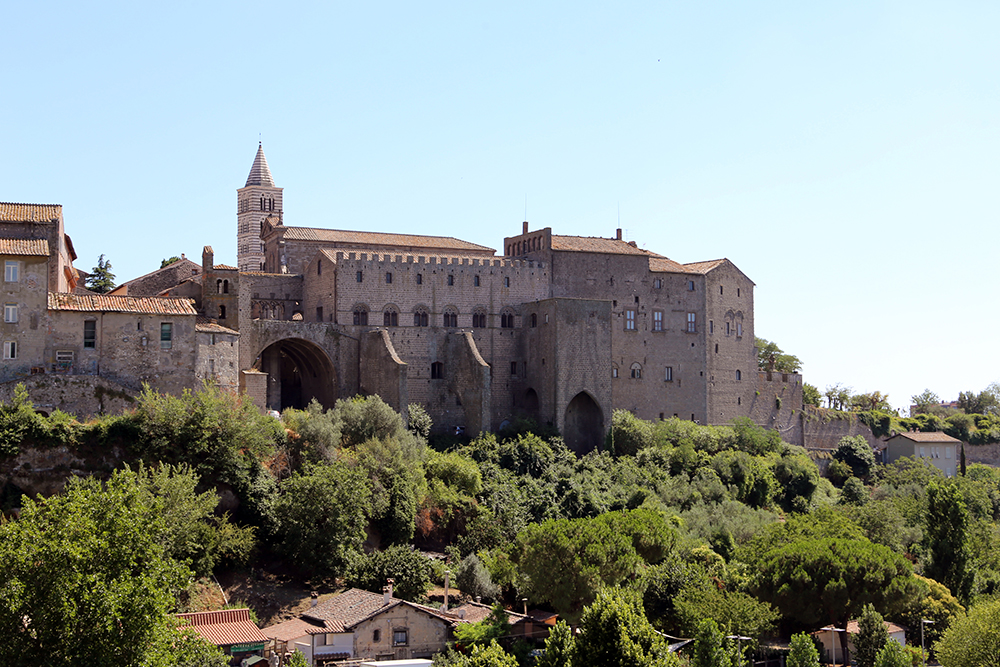 For centuries Viterbo has been named the ‘City of Popes’, in memory of the period in which the papal seat was transferred to Viterbo. It still bears the signs of that splendour, even though its origins date further back.
The ‘City of Popes’, regional county seat of ancient Etruscan origin and historical traditions, preserves some of the most important monuments of Lazio. It has aristocratic palaces, rich in interesting artworks, evocative medieval quarters, churches and cloisters from different eras, slender towers and elegant fountains made of peperino stone (the typical stone of Viterbo buildings).

It is surrounded by well preserved, high, crenellated medieval walls and massive towers (built from 1095 to 1268), with access from 8 doors. This area encompasses the entire history of Viterbo from the first settlements up to the present time. The district of San Pellegrino, in the heart of the ancient medieval city, represents an interesting example of 13thcentury style buildings. It is characterized by small squares, alleys, arches and the characteristic profferli (external stairs to access the upper floors of the buildings). On the hill of S.Lorenzo stands and important historical monument, the Palazzo dei Papi (Palace of the Popes), first constructed in 1255. It was meant to be the residence and fortress of the pontiffs and it became the center and seat of Catholicism.For over 750 years on September 3rd at 9 pm the Macchina di Santa Rosa parades down the streets of Viterbo, – a pinnacle of celebration of faith and tradition. A 28 meter high, illuminated ‘tower’, weighing 5000 kg is carried on the shoulders of one hundred men called Facchini through the town’s darkened streets. A thrilling and exciting show attended by thousands of people from far and wide who follow the machine, shouting, weeping, praying whilst inciting the bearers throughout their extraordinary show of strength and faith. This tradition first took place on the 4thof September 1258.

Villa Lante, in Bagnaia, is situated 4km from Viterbo. It is one of the greatest Italian achievements of the XVI century. The park, of over 22 hectares hosts many secular trees creating an enchanted atmosphere. In the park you can admire a spectacular system of fountains and water features arising from stunning geometric forms created by evergreen hedges and peperino statues, the overall visual effect is truly astonishing. The garden shows works by great Italian architects and sculptors such as the Fontana dei Mori (Fountain of the Moors) by Giambologna, pseudonym of Jean de Boulogne, a Flemish sculptor. Giambologna arrived in Rome in 1550 and later moved to Florence to the Medici court, where he became the greatest Mannerist sculptor of his time for his original marble and bronze creations. His most famous work is “Il Ratto delle Sabine” (“The rape of Sabines”), it is located in the Loggia dell’Orcagna, or Loggia dei Lanzi in Piazza della Signoria in Florence.